The book Capturing Footsteps and Leaving Imprints is a reflection of Jennifer’s summer study-tour to China. It contains both, photographs taken on the trip and artwork she created that responds to the journey. The Leaving Imprints section contains prints developed by students in her college level printmaking class. All proceeds from sales went to Bard High School Early College’s Art Department. 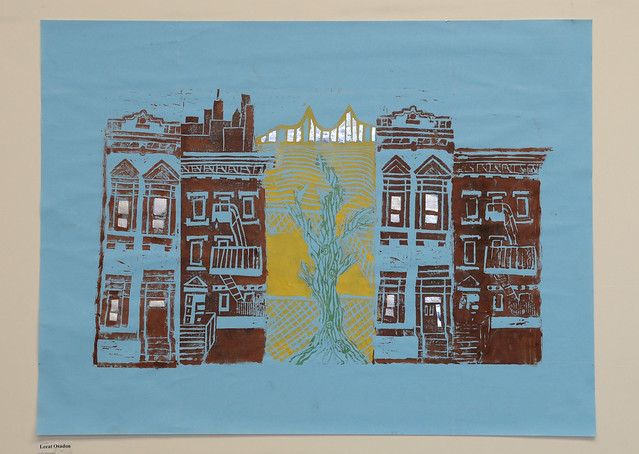 Artist: Being an artist has allowed me to express myself in many ways. I am able to convey my ideas about controversial subjects through a creative form of expression, and it has changed my life. With my art teacher’s support, I have developed immensely. Her guidance, caring, and artistic abilities have led me to uncover my creative side.

This print is a statement of our society’s preservation effort. In big cities, such as New York, little greenery can be seen in its natural habitat. The tree in this print represents nature’s inability to grow wildly; it is fenced in and left to grow in a confined area, unable to reach its full potential. As New Yorkers, we see this scene every day and we are accustomed to it. After seeing Ms. Merdjan’s photo from China, I thought about the contrast between rural and urban areas. In the photograph, the forest surrounding a small house is untouched; there is an effort to sustain nature. Yet in many parts of NYC, such as Long Island City where my school is, the environment feels like one where man-made buildings and nature don’t coexist.

Teacher: A curriculum for this unit was developed after traveling throughout China for three weeks. This opportunity was made possible with grants from The Freeman Foundation and The China Institute. My school provided additional professional development support. While abroad, I collected recycled materials for the lessons and took photographs to share with students. The artwork for this project is based on the photographs from China, and class discussions on sustainable development and cross-cultural perspectives. It has been wonderful sharing my experiences abroad; students are thinking critically, and through their art, are commenting on global and environmental issues.

Excerpts of students’ prints and written statements from the book Capturing Footsteps and Leaving Imprints: 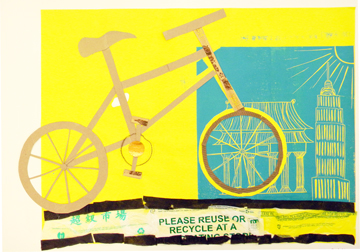 “I chose a picture that reminded me of my hometown in China. What I want to convey in my piece is the idea of two different countries using forms of transportation that do not harm the environment and prevent global warming. This is a sustainable development area of concern to me because it helps maintain and not damage the planet.

Through the process of sketching to carving the linoleum tile, my ideas changed significantly. I started out sketching buildings and a bicycle. But I thought about space and composition, and chose to make the size of the bicycle wheel bigger than the actual paper. I also tried to emphasize the shape of the wheel by making it bolder and recycling cardboard. To emphasize a successful path towards recycling, I’ve decided to make the road in my artwork out of recycled plastic bags”. 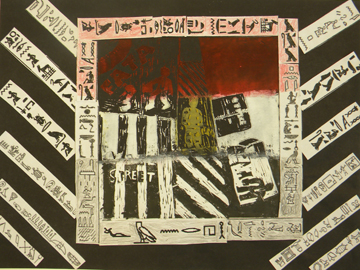 “What gave me the idea for this print was not necessarily the pictures Professor Merdjan took in China, but the idea of a person being abroad. Overall the photos showed daily activities within the Chinese culture. The photograph I chose showed me the Chinese gathering water from the ground, which reminded me of my experience drinking the water from the ground at my country, which made me very sick.

My vision in my print was that people must socialize and deal with lots of different people, so they are always sharing their own culture. I drew a man in his own cultural clothing in the depths of Wall Street, which is a place here in New York City that normally does not have as much culture due to it being a huge business place that adapt to the formality of business attire. The idea behind my artwork is that we should not be prejudice in anything we do, work or leisure; and share our culture with others. With this idea in mind and being multicultural, I am sharing my cultures through this print by carving a Panamanian man in his traditional clothes in Wall Street. I printed in these colors because they are the colors of my other culture’s flag. Red for bravery, black for determination, white for peace and honesty, and the gold and horizontal lines represent the country, Egypt”.

” The photograph I chose from China showed a performance by the director Zhang Yimou. In this photo, Chinese traditions performed by different minority groups. The outdoor theatre was incorporated into Snow Mountain. When I was developing my piece, I reflected on my own culture — mostly my American culture. But I also was reminded of my Mexican culture. This piece is a representation of the shows and culture that people in Mexico had and still have. In February, many people go to see performances in Mexico. All the scenes in my print, I chose because they are memorable and popular among tourists. The photograph from China lead to my artwork since my pictures setting has a mountain in the background and a stage in the middle. This piece shows sustainability because the people that are performing these events are sustaining a culture. They are showing the people who are not familiar with this culture, what their lives are like. Both the China picture and my print show sustainability”. 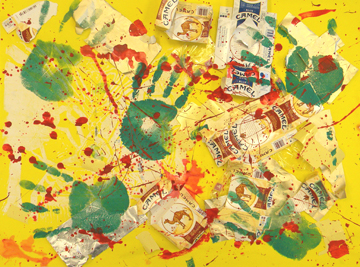 “I chose a picture of the Hindu deity Shiva, the god of death and rebirth. Where I originally intended to do a detailed portrait of him, my piece transformed into something very different than planned. My drawing of Shiva turned from a lifelike rendition to an abstract interpretation, and soon it was not at all my ideas that I felt I was drawing as much as simply drawing what was right.

The left and right sides of the print represent death and life, and in order to emphasize the death of our natural world I littered cigarette boxes (both of which kill, either the planet or ourselves, though the two are one in the same) across the page, sporadic and random, almost careless like we are. Shiva was hidden underneath this to show a transcendental consciousness shrouded in our own materialistic wasting. Humans lived for thousands of years in accord with nature, and we must return to an environmental awareness if we wish to continue living on this planet. To symbolize this human harmony I placed green handprints, a unison of the ecology of life, on the print as well. But, I also had to balance this with our own violent tendencies and I chose to splatter red paint across the piece, to fulfill the unison and balance between the peace and tranquility of life and the violence and mindlessness of death. What initially may seem like a random and careless piece is actually a subtle but conscious one, much like our pollution of our planet, and much how you must seek to find order in the piece, we as a species must seek to return to our natural order if we wish to not stray the fragile balance of our mortality”. 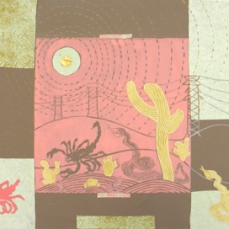 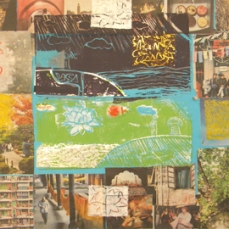